We take a closer look at the fastest dual core CPU from Intel, the E8500, dubbed Wolfdale, is manufactured at 45nm which translates in low power usage and excellent potential for overclocking. We compare the performance of this newcomer to a 65nm Core 2 Duo and overclock past the limit using LN2. Read on to find out if we froze the Wolf!

Happy moments nowadays in the Intel offices around the globe as they have been pulverizing the competition since the day the Core2Duo series saw the daylight. Looking back in the Madshrimps archives, we found our first contact with the C2D processors almost two years ago.

The then so powerful AMD Athlon 64 processing units were practically blown away when the new high-end chips of Intel hit the forums as the results were that impressive that everyone started saving up to have one of those Intel bad boys. Thanks to the massive amount of L2 cache, which was four times the size AMD ever equipped their high-end CPU with; one just felt that Intel made a giant leap forward. Since we saw the first C2D's arrive at our Madshrimp facilities, we have seen various different models passing by, the one more impressive than the other. In fact, we saw Intel compete with itself in an attempt to produce the best cost-effective AND the best performing processor on the market.

The desktop Core 2 Duo series falls apart in four different sections, namely the E2xxx, the E4xxx, the E6xxx and of course the Q6xxx series, where the last group is in fact two E6xxx category CPU's pasted together to form a quad-core. All of these processors have their own advantages and each of them are worthy to be called 'a smart investment', however it seems that Intel is really trying to gain every penny out of the C2D on 65nm production procedure.

It has been a few months now since the newer C2D chips have arrived: the 45nm Yorksfield and Wolfdale processors. The Yorksfield Quad Core CPU we tested here, so this only leaves us with the Wolfdale .

Before we continue our review, I'd like to spend a few words on the shop that made it possible to review this E8500 ES, namely Alternate Belgium. Alternate used to be a Germany-only webshop, but it has expanded over Western-Europe and since a few months, there have a brick and mortar store in Belgium as well. As they insist on good service, Alternate uses a large stock which you can order online for quick turnaround. (according to the information on the website, you receive your products the next day if ordered online before 15h00!). For our Belgian readers, please visit www.alternate.be in order to find out more about Alternate Belgium.

Thanks to Alternate.be, we managed to lay our hands on an E8500 ES CPU, one which is not widely available yet. By the time this review gets published, the E8500 paper launch should have been transformed in an actual launch and everybody should now be able to buy one. 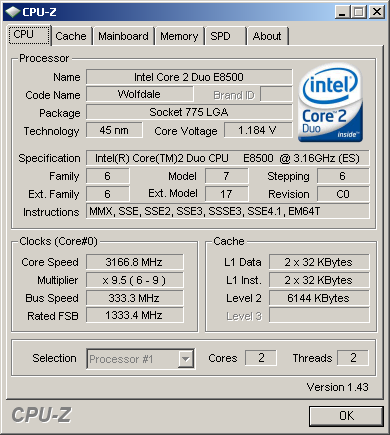 Comment from Sidney @ 2008/02/19
Price to peformance ratio, this may put the end to exotic w/c and even highend air cool. Well over 4G with stock cooler is another sign of what good engineering from the beginning means.

I wonder the outcome if you put a Q6600 stock cooler in for an upgrade.