Using Liquid Nitrogen to control the CPU temperature to gain impressive increases in performances from the highest rated Intel Core 2 CPU. In this article the members of OCTB reach for a new high by chilling an X6800 well below zero.

Today we take a closer look at what it takes to overclock a new Intel Core 2 X6800 beyond the limits of air cooled speeds. In general if one wants to push his hardware further than intended by the manufacturer the cooling of the device is upgraded as well as the power input. In this particular case with a CPU this means higher vcore voltage and a more extreme cooling solution.

By lowering the temperature of the CPU the speed can be increased easily over default, the colder the better right? While this may have been so a couple of years ago, current overclocking attempts with extreme cooling can have you run into problems previously unheard of. If the CPU is running too cold it will start to act up, causing random shutdowns, diminished overclocking (AMD’s HTT/FSB speeds) or simple refusal to boot. This bug is called the “Coldbug” in overclocking circles and has stopped many from reaching the desired CPU speed.

In order to find a balance between “ice cold” and “too cold” you need to be able to decrease the temperature gradually up to the point of failure and then back off a bit; much like with CPU overclocking, but now with the temperature too. With the help of a large home made container (mostly copper design) and a large supply of Liquid Nitrogen we set out to control the CPU temperature of the Intel X6800 to allow for an impressive overclock.

LN2 can take the CPU temperature well below zero, -196°C to be exact, the Intel Core 2 however starts to act up at the -140°C mark (measured at the base of the container). So we set off the get as close to this limit as possible. The X6800 is Intel’s current Dual Core flagship CPU, with a free multiplier you are not constrained by the overclocking capabilities of the motherboard. If we used a lower end CPU like an E6600 we would need a motherboard that could go well over 500Mhz on the FSB (up from 266Mhz) and unfortunately for us, not many motherboards can achieve those speeds.

This particular X6800 CPU has been overclocked using different cooling methods so we got an idea of what to expect.

With Air Cooling the CPU went up to 3920Mhz, and calculated SuperPi 1M (that is calculating the number Pi up to 1 million digits after zero) in 12.968 seconds. For anybody wondering if this is fast or not, a top end AMD FX-60 CPU overclocked to 3473Mhz does it in 24.59; The X6800 is blistering fast. 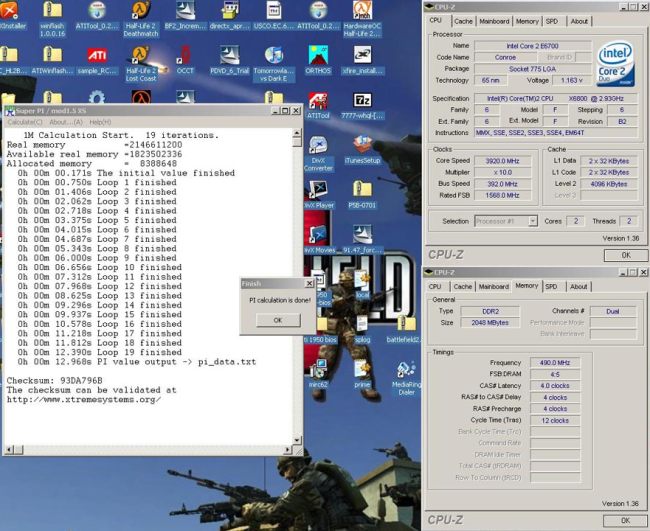 We could have used Water Cooling next but didn’t think this would net us a large increase, so we skipped straight onto Phase Change Cooling, we used our trusty nVentiv Mach 2 which has been modified for higher performance (lower temperatures under load). With this cooling mounted on top of the X6800 chip temperatures were below zero (-43°C idle and -23°C load), our overclocked increased to a respectful 4487Mhz, SuperPi 1M now finished in 11.531 seconds! 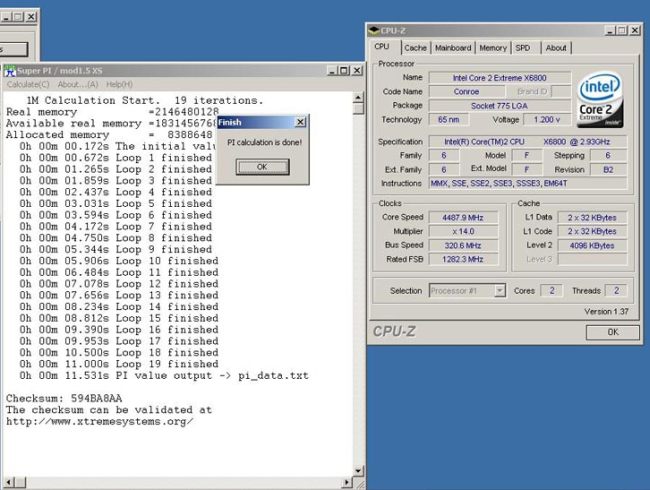 Not happy with “only” -23°C we hooked up a Cascade Phase Change Cooling, as the name might imply, the cascade puts different phase change cooling units in series, where on unit cools the other to allow for lower temperatures; In our case we had a dual stage Cascade. Load temperatures dropped to -49°C and idle was close to -100°C. What can -25°C cooler temperatures do for your overclocking? In our case we gained over 600Mhz, up to 5068Mhz with SuperPi finishing in an amazingly fast 10.344 seconds. 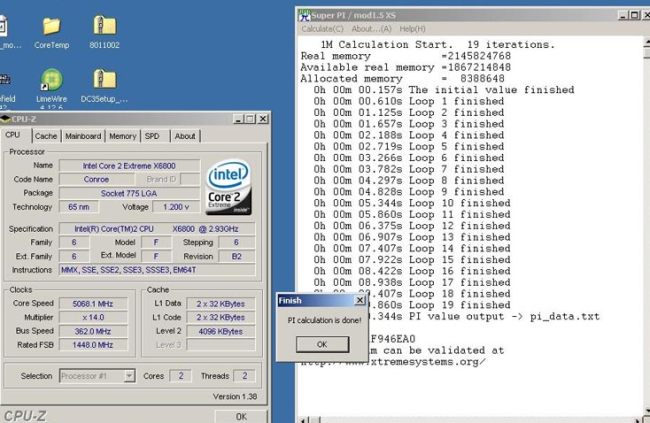 It’s the need for speed which drives us to go faster and higher, the result with the Cascade cooling was far from disappointing, but we really wanted to join the “minus 10 seconds” SuperPi club, so we loaded up a few liters of LN2 to start an extreme benchmarking sessions ->